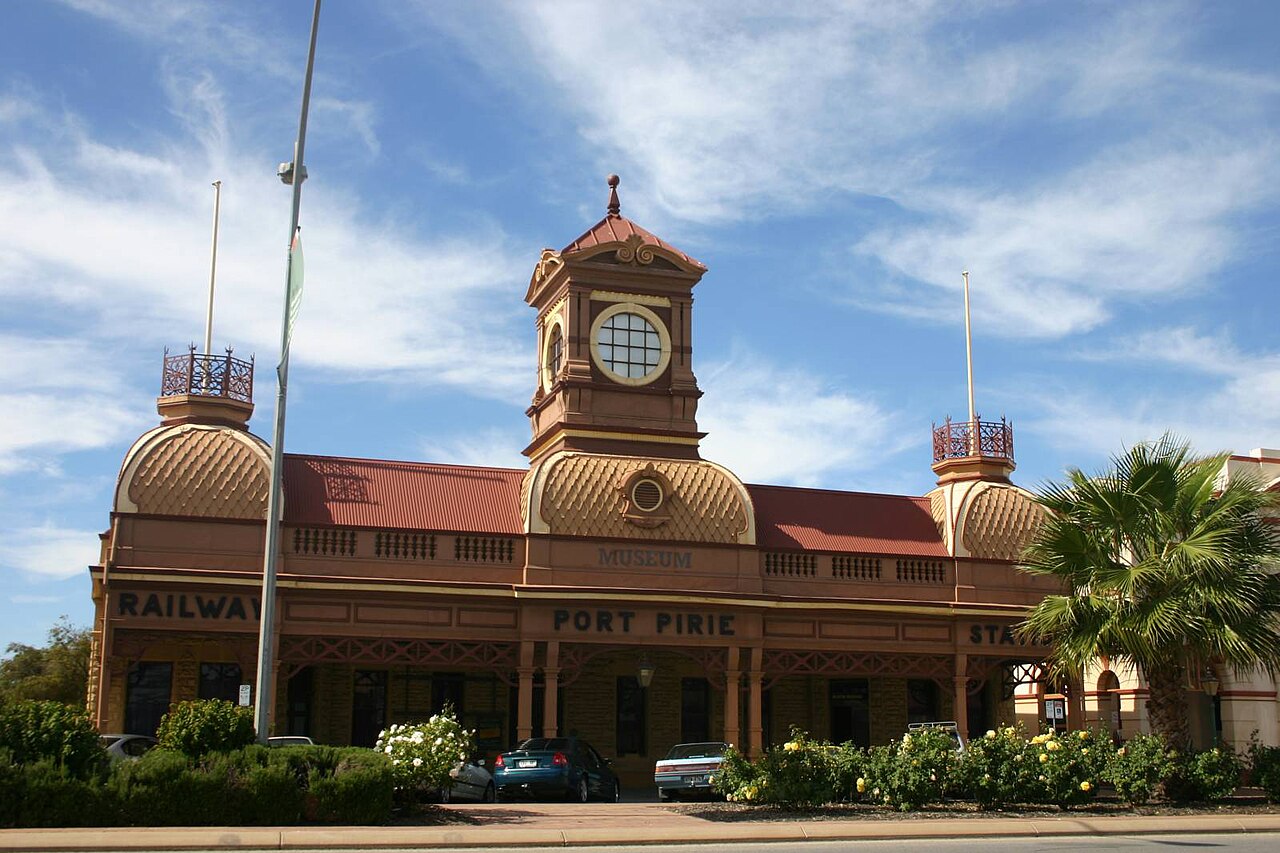 Port Pirie is the sixth most populous city in South Australia after Adelaide, Mount Gambier, Whyalla, Murray Bridge and Port Lincoln. It is a seaport on the east coast of the Spencer Gulf, 223 km (139 mi) north of Adelaide. The settlement was founded in 1845 and is the site of the world’s largest lead smelter, operated by Nyrstar. It also produces refined silver, zinc, copper and gold. Port Pirie is at an elevation of 4 metres above sea level. It is approximately 8 kilometres (5.0 mi) inland, on the Pirie River, which is a tidal saltwater inlet from Spencer Gulf. It is on the coastal plain between Spencer Gulf (to the west) and the Flinders Ranges to the east.

Port Pirie is 5 km (3 mi) off the Augusta Highway. It is serviced by Port Pirie Airport, six kilometres south of the city. The main industries are the smelting of metals, and the operation of silos to hold grain. Port Pirie is the main centre for the Mid North area. Many towns in the area rely on Port Pirie for shopping and employment. It also has many educational institutions such as John Pirie Secondary School (years 8-12), St Mark’s College (reception – year 12), Mid North Christian College (reception – year 12), many preschools and primary schools, and a TAFE Campus (Adult Education). Port Pirie is home to the National Trust Historic and Folk Museum and Memorial Park. Every September and October it hosts a country music festival. It has significant Italian & Greek communities.

Port Broughton is a small South Australian town located at the northern extent of the Yorke Peninsula on the east coast of Spencer Gulf. It is situated about 170 km north west of Adelaide, and 56 km south of Port Pirie. Lying on the eastern side of Spencer Gulf, Port Broughton’s coastline is relatively protected, resulting in large expanses of shallow water and seagrasses, tidal flats and vast areas of mangroves that flank the inlet on which the town is built. The small town of Fisherman Bay lies 5 km north of Port Broughton and has much the same coastal features. Between the mouth of Fisherman Bay and Port Broughton lies Shag Island, an important breeding site for several species of cormorant. The Broughton River lies further north toward Port Pirie, where its estuary is located. Further inland, most of the land is fairly featureless farming country, with only fragments of the original vegetation remaining.

The town has a number of sporting clubs including Cricket and Netball clubs, and an Australian rules football club playing in the Northern Areas Football Association as the Broughton-Mundoora Eagles. Port Broughton Area School and Port Broughton District Hospital & Health Service provide the towns educational and medical needs respectively.

Have a unique dining experience

The town of Clare (postcode 5453) is located in South Australia in the Mid North region, 136 km north of Adelaide. It gives its name to the Clare Valley wine and tourist region. As one of the larger towns in the region, Clare is an administrative and service centre for the surrounding area. It has two supermarkets, many other specialty stores, two public and two private schools, three hotels, two motels, a caravan park and showground. Clare has become recognised for its ‘experiences’, including the Riesling Trail walking and cycling route from 9 km north of Clare to Auburn (25 km), on the former railway alignment, so named as it weaves past vinyards and wineries, and continuing to Riverton as the Rattler Trail.

The Clare Valley wine region continues within the same line of hills as the famous Barossa Valley, and also produces some excellent wine. Clare is governed at the local level by the District Council of Clare and Gilbert Valleys. Clare lies in the state electoral district of Frome and the federal electoral division of Division of Wakefield.

Kadina, part of the Copper Triangle, is located 150 km north-west of Adelaide and 44 m above sea level. It is claimed that Kadina is taken from a Narangga Aboriginal word, either ‘caddy-yeena’ or ‘caddy-inna’ which probably meant “lizard plain”. The best way to see Kadina’s large number of historic buildings is to visit the Copper Coast Visitor Information Centre, pick up a Discovering Historic Kadina Town Walk brochure, head to the Kadina Town Hall and then mooch around the well signposted historical sites including the Kadina Railway Station; the Victoria Square Rotunda, the Town Hall with its its impressive clock tower donated by Daniel Squibb, a local blacksmith; the Banking and Currency Museum; the Church of Christ; the stone residences in Lipson Avenue; the Pioneer Cemetery; the Wallaroo Mine and the former Police Residence.

The Farm Shed Museum, as its name suggests, is a series of very substantial sheds which make up an excellent museum, now run by the National Trust, which successfully attempts to record the history of farming and mining on the Yorke Peninsula. Located 1.5 km south of the town centre the centrepiece is Matta House – a beautifully kept and maintained mine manager’s house built in 1863 which has a shingle roof, a well kept cottage garden and is furnished with Victoriana. It is an excellent insight into the lifestyle of an important member (Edward Austin Horn, the manager of Matta Mine) of Kadina’s mining community in the 19th century. Located at the Farm Shed Museum is a miniature railway run by the well-named Copper Coast Old Engineering and Machinery Club. Wallaroo is located at the north-western end of the Yorke Peninsula 159 km from Adelaide on the Spencer Gulf. The town is 13 m above sea level. It is one of the three Copper Triangle towns famed for their historic shared copper mining industry, and known together as “Little Cornwall”. Wallaroo exists in a grain farming area with a moderate to low rainfall. It is located on the foreshore and is 13 metres above sea level. Wallaroo has a dry Mediterranean climate with seasonal temperatures a few degrees above Adelaide’s temperatures. The temperature ranges are similar to those of Kadina and the weather patterns are similar to those of Kadina and Adelaide. In the summer Wallaroo has a light cool sea breeze on hot afternoons that sometimes makes the hottest afternoons more bearable than further inland.

Tourism associated with the copper mining history and marine leisure activity has become a major part of Wallaroo’s economy in the latter 1900s.[citation needed] The three-day Kernewek Lowender Cornish festival is held every odd year in May, with Kadina, Moonta and Wallaroo each hosting the festival for one day. From the 1990s, beachfront development in the town has accelerated with new housing developments situated at Office and North beaches. The Copper Cove Marina commenced construction at North Beach in 1997 and expects, on completion, to contain a total of 154 marina berths with a proportionate number of new residential and commercial plots.