View of the lake from the park

Joondalup is a regional metropolitan city within Perth, Western Australia, approximately 26 kilometres (16 mi) north of Perth’s central business district (CBD). It acts as the primary urban centre in Perth’s outer northern suburbs. Joondalup as a centre has no statutory boundaries. The Australian Bureau of Statistics have determined a statistical area which covers all of the City of Joondalup north of Ocean Reef Road, which uses Lakeside Joondalup as a regional shopping centre and uses Joondalup railway station as a public transport hub.

Joondalup’s central business district, centred on Grand Boulevard, is largely a shopping and retail area lined with townhouses and apartments. Lakeside Joondalup Shopping City is located adjacent to the Joondalup railway station and backs onto Grand Boulevard. Joondalup is home to the Joondalup Festival, an annual event that takes place in the CBD featuring markets, music, fashion, street arts, fairground rides and street parades. The festival is free-of-charge and attracts people from all over the Perth metropolitan area.

The city has a number of parks including Central Park and Neil Hawkins Park in the Yellagonga Regional Park. The Neil Hawkins Park is home to many parrots, including the Australian ringneck, cockatoos and kangaroos. The park sits alongside Lake Joondalup and wetlands which stretches out between Burns Beach Road to the north and Ocean Reef Road to the south. These wetlands provide refuge for migratory birds. Joondalup’s coastal front consists of Burns Beach in the north and Beaumaris Beach in Ocean Reef, running onto the Ocean Reef Boat Harbour in the south.

The City of Wanneroo is a local government area with city status in the northern suburbs of Perth, Western Australia. It is centred approximately 25 kilometres (15.5 mi) north of Perth’s central business district and forms part of the northern boundary of the Perth metropolitan area. The city’s main commercial and residential town centres are located at Wanneroo in the east and Clarkson in the north. Further urban centres are planned at Alkimos, Yanchep and Two Rocks in the future to coincide with rapid metropolitan expansion and development in the area. It is also home to the Yanchep and Neerabup National Parks, as well as the Neerabup Industrial Estate in the north.

Wanneroo covers a land area totalling 685.8 square kilometres (264.8 sq mi). The city is bounded by Beach Road and the City of Stirling to the south, Alexander Drive and the City of Swan to the east, Wanneroo Road and Lake Joondalup to the south-west, the Indian Ocean to the west and the Shire of Gingin to the north. The City of Wanneroo is served by two major north–south arterial roads, Wanneroo Road and Marmion Avenue. The two roads run parallel to each other through Wanneroo’s eastern and western suburbs respectively. A third north–south arterial route, the Mitchell Freeway, is proposed to be extended from Burns Beach Road through to Toreopango Avenue and beyond.

Place for recreation for young children

Greenwood is a suburb of Perth, Western Australia, located in the City of Joondalup. The suburb is located 18 km from Perth’s central business district. It is bordered by the Mitchell Freeway, Hepburn ave, Wanneroo road and Warwick road. The north-eastern corner contains a small commercial/industrial area centred on Canham Way. This precinct hosts a variety of businesses including a butcher, tyre store, landscaping supplies, martial arts, reticulation, hardware, thrift shop and others. A small commercial centre is located on Wanneroo Road, south of Canham Way.

The main shopping centre in the suburb is Greenwood Village Shopping Centre, on Calectasia Street. The centre includes a Coles supermarket and a range of other retailers, including a butcher, bakery,24 Hour gym, greengrocer, pharmacy, pizza shop, newsagent, barber, Post Office and others. In the general vicinity of the shopping centre is a BP Service Station, a commercial centre and a popular pub called The Greenwood Hotel. ‘The Greenwood’ is the official support pub for boxer Danny Green. The suburb is served by Transperth bus routes 445, 446, 447 running in both directions between the Warwick and Whitfords rail interchange stations. The suburb is also served by the Greenwood railway station. Greenwood is bordered on the south by Warwick Road and on the north by Hepburn Avenue. Both of these roads have northbound and southbound entrances and exits to the Mitchell Freeway, which forms the western boundary for the suburb.

The city is also active in introducing skateboard lessons and does their practice in Paloma Skate Park. Techniques from several Western Australia’s pro athletes on what works best in their training are being taken as benchmark.

Clarkson is an outer northern suburb of Perth, Western Australia, located 34 kilometres north of Perth’s central business district in the City of Wanneroo. While mostly a residential area, it also functions as a town centre, serving many surrounding areas with a vast amount of amenities and facilities. The suburb has a railway station on the Joondalup railway line and also is a major public transport hub for surrounding suburbs. Clarkson is bounded to the west by Mindarie (Marmion Avenue) and to the north by Merriwa and Ridgewood (Hester Avenue). The Joondalup railway line divides Clarkson from the Neerabup National Park in the east. South of Clarkson is Tamala Park, which is uninhabited. It is approximately 2 kilometres away from the Indian Ocean and the coastlines of Claytons Beach and Quinns Beach.

Compared to surrounding suburbs, Clarkson is a very mixed-use area with an abundance of facilities and a very large shopping and retail district, establishing it as a commercial town centre for the northern suburbs beyond the nearby city of Joondalup. The main road, Ocean Keys Boulevard, is home to the Ocean Keys Shopping Centre, a major shopping mall with a large number of major retail outlets, including Target, Kmart, Coles, Woolworths, JB Hi-Fi, City Beach and 115 specialty retailers. 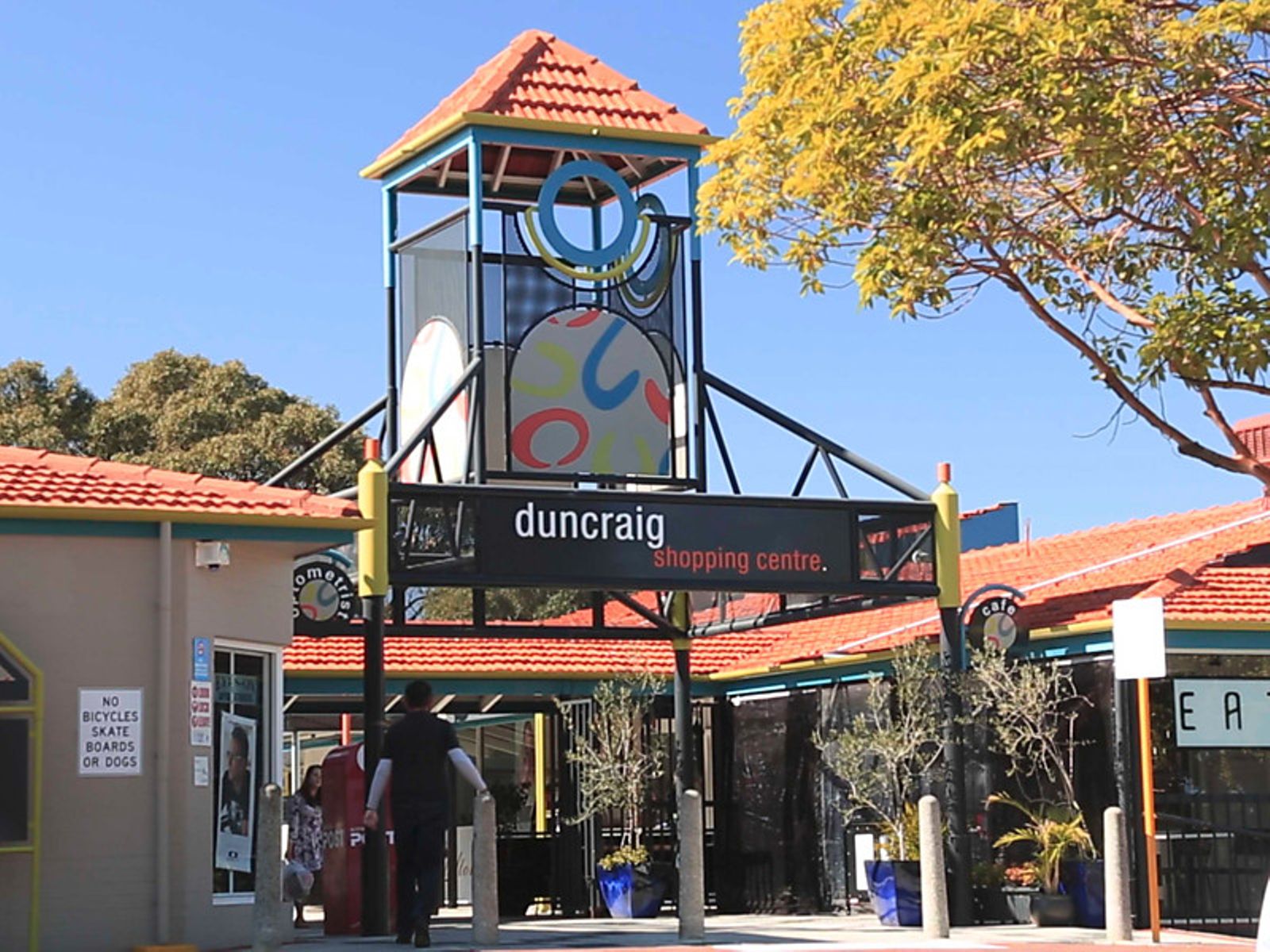 Duncraig is a northern suburb of Perth, the capital city of Western Australia, and is located 16 kilometres (10 mi) north of Perth’s central business district (CBD) between Marmion Avenue and Mitchell Freeway. Its local government area is the City of Joondalup. Duncraig is bounded by Beach Road to the south, Mitchell Freeway to the east, Hepburn Avenue to the north and Marmion Avenue to the west, and Warwick Road runs through the centre of the suburb. Almost all of Duncraig is residential, although many small parks and bushland areas can be found throughout. In the Northwest corner of Duncraig is a tangle of streets named after Gilbert and Sullivan characters and personalities. Gilbert Road meets Sullivan Road there, near Savoy Place, Pinafore Court, and streets named after 30 characters from the Gilbert and Sullivan operas. The only Gilbert and Sullivan performer with a street named after him is Bernard Manning (1888–1961), a performer with the J. C. Williamson company and founder of the Gilbert and Sullivan Society of Western Australia in Perth.

Duncraig is a residential suburb, although has numerous small parks and bushland areas, and the Percy Doyle Reserve which contains a library and recreation centre. It also contains a multipurpose sports complex including several football fields and soccer pitches, lawn bowl greens and over 20 tennis courts. Several neighbourhood shopping centres are dotted throughout the suburb, the largest of which are Glengarry and Carine Glades, each of which also has a tavern offering pub meals. Nearby the Centro Warwick to the southeast, Karrinyup Shopping Centre to the south and Westfield Whitford City to the northwest provide for a wide range of retail shopping. Glengarry Private Hospital, together with a number of specialist medical centres/services are located on Arnisdale Road behind the Glengarry shopping area.

Place for entertainment, shopping and dining

Currambine is a northern suburb of Perth, the capital city of Western Australia 30 km north of Perth’s central business district. Its local government area is the City of Joondalup. It contains the Currambine Central shopping centre and cinema complex. Currambine was approved as a suburb name in 1980. The name was chosen by the City of Wanneroo in 1979 from a book by A.W. Reed. It is an Aboriginal word from New South Wales meaning “heaps of rocks”.

Currambine is bounded by Burns Beach Road to the north, Marmion Avenue to the west, Shenton Avenue to the south and Mitchell Freeway to the west. The suburb is effectively bisected into quarters by the dual carriageways Connolly Drive (north-south) and Moore Drive (east-west). Currambine is a residential suburb, and is served by the Currambine Market Place shopping centre (now renamed Currambine Central) at its southwestern corner.

Hillarys is mostly a residential suburb, and relies on Westfield Whitford City, a large shopping centre in its northeast, and the smaller Hillarys Shopping Centre (2003) on Flinders Avenue for commercial services. St. Mark’s Anglican Community School is a K-12, co-educational private school located to the West of Westfield Whitford City, on the former Red Cattle Ridge site. Several parks and walkways of various sizes are situated in the suburb, and there are picnic facilities in a coastal park just north of Hillarys Boat Harbour. Unlike beaches further to the south, though, the beach at Hillarys is relatively difficult to access due to large sand dunes and remnant vegetation, and Whitford Beach to the north and Sorrento Beach to the south provide access. Off the coast is the Marmion Marine Park, which provides a home for many species of marine animals.

Ocean Reef is a suburb in northern Perth, Western Australia. It is located within the City of Joondalup. The name was coined by developers in the 1970s from the line of a reef visible several kilometres offshore. The name was formally adopted in 1974, replacing the prior name of Beaumaris, a name still retained by one of the shopping centres and one primary school.