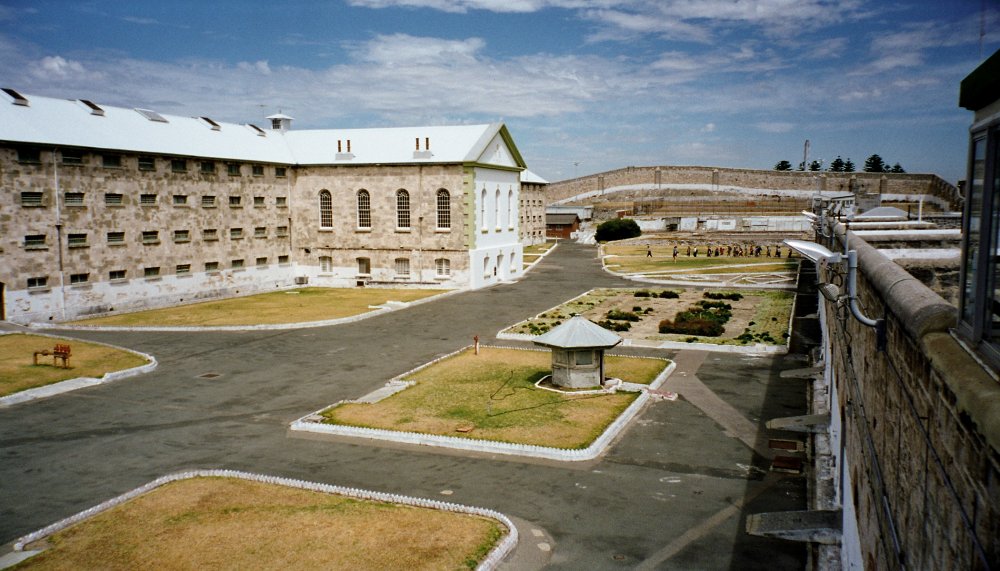 Fremantle is a major Australian port city in Western Australia, located at the mouth of the Swan River. Fremantle Harbour serves as the port of Perth, the state capital. Fremantle was the first area settled by the Swan River colonists in 1829. The city is named after Captain Charles Fremantle, the English naval officer who established a camp at the site on 2 May 1829. The city contains well-preserved 19th century buildings and other heritage features. The Western Australian vernacular diminutive for Fremantle is Freo. The Nyungar name for the area is Walyallup.

Fremantle lies on a series of limestone hills known by the Nyungar people as Booyeembara; the sandplain to the east is Gardoo. The original vegetation of the area was mainly Xanthorrhoea and eucalyptus trees, which were traditionally fired annually by the Aboriginal people. Fremantle is renowned for its well-preserved architectural heritage, including convict-built colonial-era buildings, an old jetty and port and prisons; presenting a variety and unity of historic buildings and streetscapes. These were often built in limestone with ornate façades in a succession of architectural styles. Rapid development following the harbour works gave rise to an Edwardian precinct as merchant and shipping companies built in the west end and on reclaimed land. 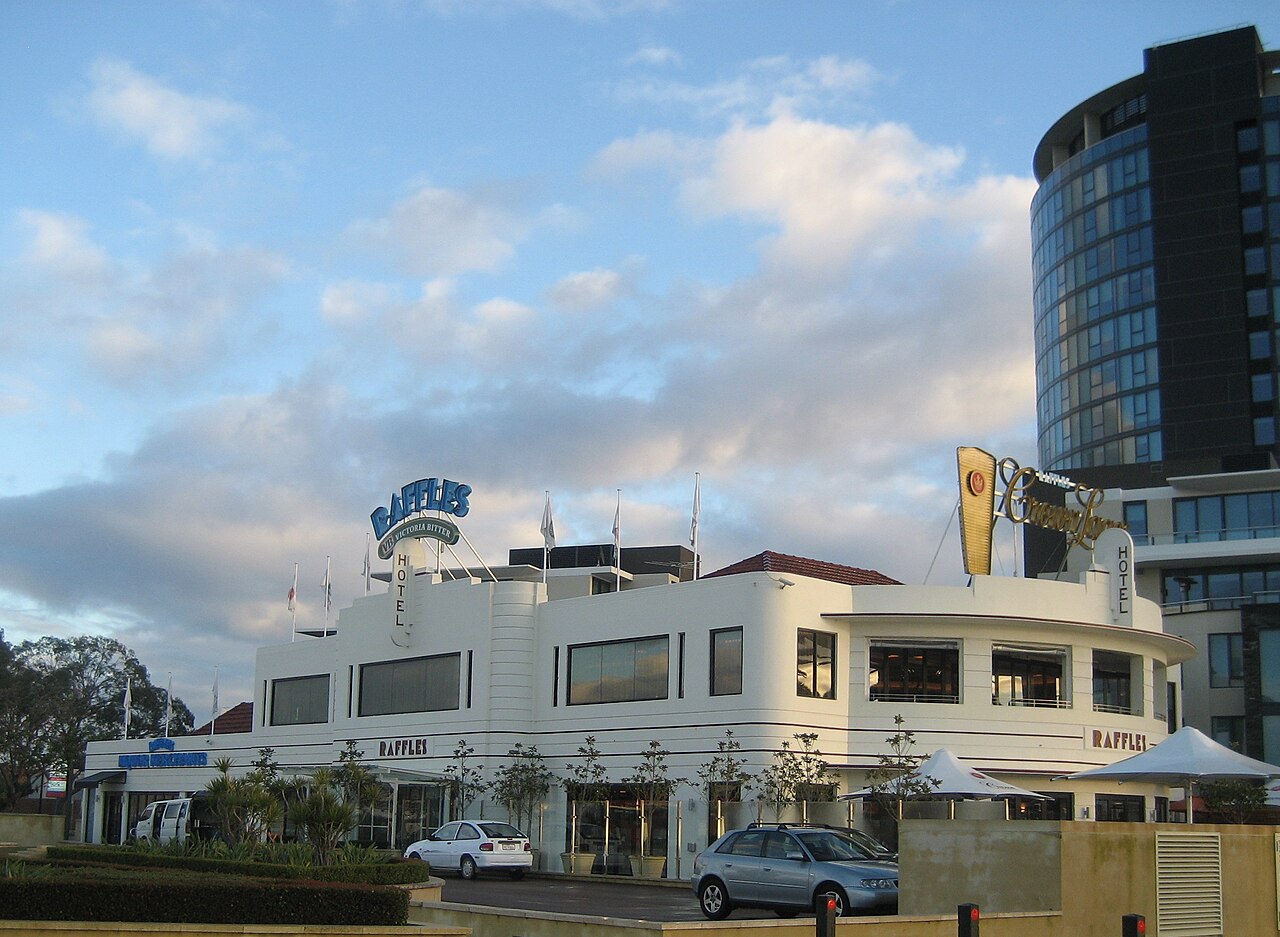 Suitable location for accommodation and refreshments

Applecross is a riverside suburb of Perth, Western Australia, bounded by Canning Highway and the Swan River. It is located within the City of Melville. A distinguishing feature of the suburb is the jacaranda trees that line its streets and flower in the late spring. In keeping with this theme, Applecross is home to an annual Jacaranda festival in late November.

A number of well known landmarks and facilities are in Applecross. These include: Raffles Hotel and apartments at Coffee Point, South of Perth Yacht Club, The former Heathcote Hospital – used for mental health services from 1929 to 1994, Waylen Bay, and Canning Bridge.

Raffles Hotel is located at the corner of Canning Highway and Canning Beach Road in the Perth suburb of Applecross, Western Australia. It is a two-storey hotel designed in the Inter-War Functionalist style and is one of the few examples of a hotel in this style surviving in the Perth metropolitan area. Canning Bridge is a traffic bridge which is the most downstream crossing of the Canning River in the city of Perth, Western Australia. The bridge is a part of Canning Highway, and it connects the suburbs of Como and Applecross. The Canning River is approximately 100 metres (328 ft) wide at the crossing, the narrowest point of the river along its downstream stretch. It is located near the Canning Bridge railway station. Coogee is a southern coastal suburb of Perth, Western Australia, located within the City of Cockburn. The suburb takes its name from the lake, Lake Coogee, in the area, which translates to “Body of water” in the native Aboriginal Nyoongar language. Originally this lake was named Lake Munster after Prince William, the Earl of Munster, and later King William IV. The aboriginal name Kou-gee was recorded in 1841 by Thomas Watson and has been variously spelt Koojee, Coojee and Coogee.

Coogee is located 7 km south of Fremantle and overlooks Cockburn Sound with views of Garden Island, Carnac Island and Rottnest Island. The suburb is bounded by Ocean Road to the north, Hamilton Road to the east, the Beeliar Drive (road extension) to the south and Cockburn Road/Indian Ocean to the west. There is a single government primary school, Coogee Primary School, located in the southern portion of the suburb. The main recreation reserves are Poole Reserve on Hamilton Road and Coogee Beach on the Indian Ocean. Immediately south of Coogee Beach is the Coogee Beach Caravan Park. 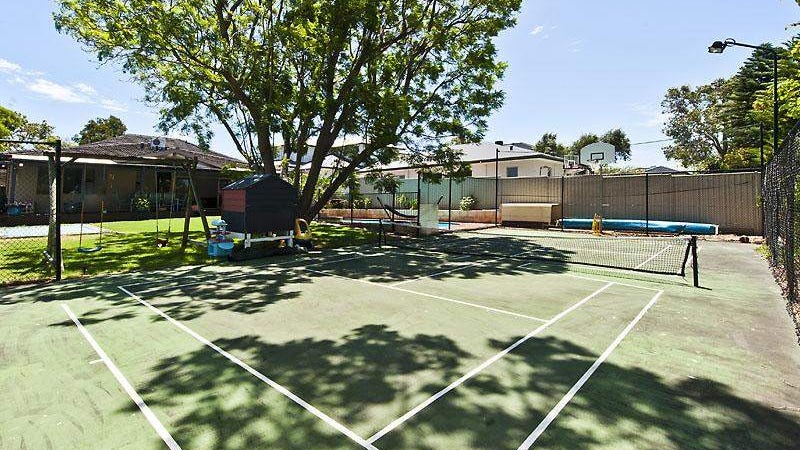 Attadale is a riverside suburb of Perth, Western Australia, located within the City of Melville. It was the first subdivision of A.P. Matheson’s Melville Water Park Estate. Attadale was named after an estate in Scotland situated on the south side of Loch Carron. The suburb is located between the central business district and Fremantle along the southern side of the Swan River. Its extensive foreshore has many open spaces for residents and visitors including a large public open space along Burke Drive where residents can take their dogs for recreational activities.

Palmyra is a suburb of Perth, Western Australia, located within the City of Melville. The suburb east of Fremantle appears to have been first established as the Palmyra Estate in 1903. The north-eastern corner of Palmyra is some 14 Kilometres from the Perth G.P.O. Palmyra includes the Fremantle Cemetery at its south-eastern suburb boundary, south of High Street/Leach Highway. Starting from its northern boundary, clockwise, Palmyra is bounded by the Canning Highway; by Stock Road on its East; by Sainsbury Road on its South; and in a dog-leg, by Carrington Street on its West, and Marmion Street on its South, and Petra Street on its West.

There are two Parks in Palmyra – Emily Main Park south of Palin Street, and the George Thomson Park on McKimmie Road diagonally opposite the State Primary School. To the south, there is also a Reserve bounded by McGregor Road, Hunter Crescent, the Leach Highway, and McManus Way. The Melville History Society meets at the Miller (Family) Bakehouse, corner of Elvira and Baal Streets, Palmyra. 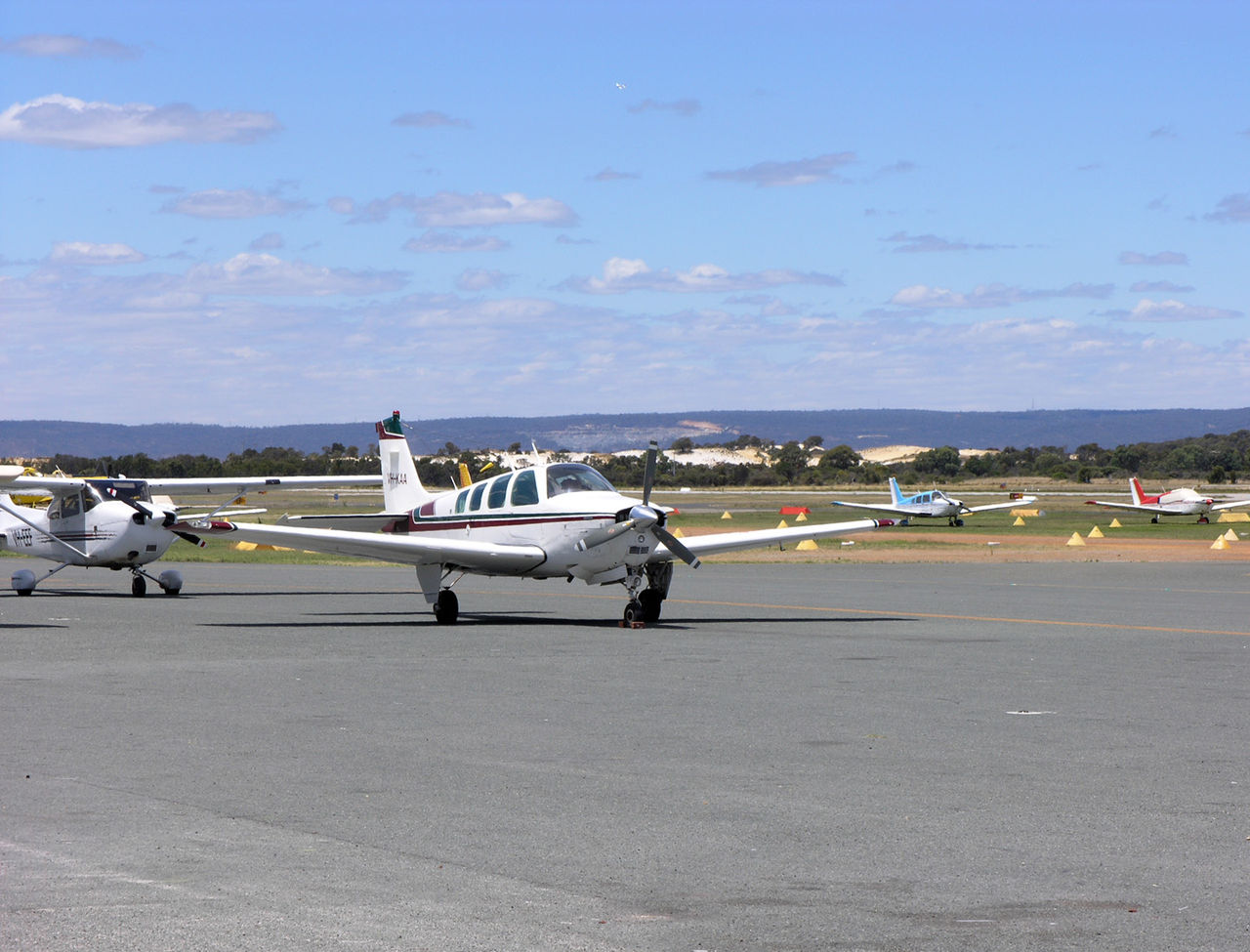 Light aircraft at a distance

Jandakot is a southern suburb of Perth, Western Australia, located within the City of Cockburn local government area. It is best known for its small, but busy, airport. Jandakot was originally named from Lake Jandakot, which was renamed lake Forrestdale in 1973. Maps of the Swan River Colony produced in the early 1830s show a lake of vast extent situated south west of Kelmscott. It is bounded to the north by the Roe Highway, Kwinana Freeway to the west, Johnston Road to the east and to the south by Fraser Road, Jandakot Road, Solomon Road and Armadale Road. The northeastern boundary of the suburb is also the municipal boundary of the City of Melville and the eastern boundary is the municipal boundary of the City of Canning.

Jandakot is best known for Jandakot Airport located within it. Jandakot Airport serves pilot testing and domestic plane flights. It is the busiest secondary airport in Australia. A popular feature is the cafe that overlooks the runway. The airport was opened in 1963 and has almost perfect weather all year round.

Murdoch is a suburb of Perth, Western Australia, located within the City of Melville. Murdoch University, St John of God Hospital Murdoch and Fiona Stanley Hospital are located in Murdoch. The suburb is named after Sir Walter Murdoch. Murdoch is located next to Winthrop, Bateman, Kardinya and North Lake. Boundaries with these suburbs are delineated by Somerville Drive, Murdoch Drive, Prescott Drive and Farrington Road respectively.

Murdoch’s residential area is primarily on the northern side of South Street; the area on the southern side is primarily for commercial usage. While hospitals and educational institutions dominate the suburb’s land usage, the area also includes a police station, fire station and juvenile detention centre. There are two major hospital complexes within Murdoch: the privately owned St John of God Hospital and the Government-operated Fiona Stanley Hospital, which opened in October 2014. Bibra Lake is a suburb of Perth, Western Australia, which takes its name from the extensive freshwater lake within its boundaries. It is located within the City of Cockburn. It is bounded by the Roe Highway reservation to the north, Stock Road to the west, the Kwinana Freeway to the east and the freight rail line to the south. Bibra Lake is the fourth lake (going north to south) of a string of lakes which combined comprise the Beeliar Regional Park. Bibra Lake contains two electric insect traps designed to reduce the number of mosquitoes in the area. Around the lake is a cycle way which provides access to bird hides.

The majority of the suburb, which is not part of the Beeliar Regional Park contains a major light industrial area, with businesses such as Amcor. Bibra Lake is the location for several major private recreation facilities, including Adventure World theme park, a bungee jumping tower, Cockburn Ice Arena, paint ball and laser tag operations. Bibra Lake also has a Waldorf primary school and a Montessori primary school. Also, the manufacturing facilities and headquarters for OKA Australia are in Bibra Lake. 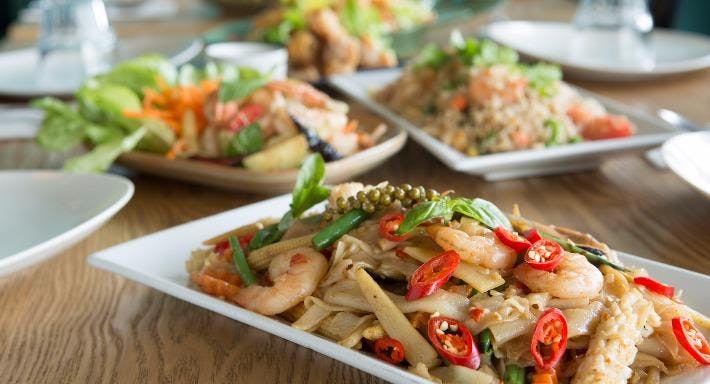 Myaree is a suburb of Perth, Western Australia, located within the City of Melville. Myaree gets its name from an Aboriginal word meaning foliage. Myaree is a predominantly light industrial area. When it was developed, roads were named after soldiers killed in World War I and early settlers in the area.

Leach Highway is a 23-kilometre (14 mi) east-west arterial highway in the southern suburbs of Perth, Western Australia, primarily linking Kewdale and Perth Airport with the city of Fremantle. It is allocated State Route 7 and is a dual carriageway for its entire length. Leach Highway varies in width between 4 and 6 lanes, and in speed limit between 70 and 80 km/h (43 and 50 mph). Leach Highway is one of the state’s most important heavy vehicle routes. It links the major industrial areas of Kewdale and Welshpool with Western Australia’s major container port at Fremantle. Although Leach Highway’s western terminus is at Carrington Street in Palmyra, High Street continues for a further 1.5 km (0.9 mi) into Fremantle, and connects Leach Highway to Stirling Highway.